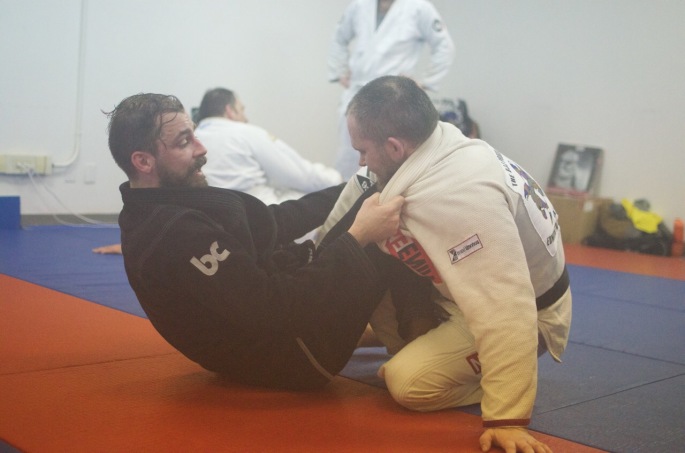 Ok to be fair this quote doesn’t give enough credit to the ingenuity and creativity of dancers and dance choreographers, BUT i’ve felt much the same about Jiu Jitsu for a while.

Like either my writing on jiu jitsu needs to be a completely dry anatomical, bio mechanical, scientific breakdown of how to use leverage, pressure, momentum and so on, OR it would end up being a full blown love poem; not mentioning a single jiu jitsu term, position or technique, but rather an un-apologetic sonnet to a most incredibly beautiful movement science, given form and power by two combatants, who are expressing the art not through careful choreography, or even cooperation, but instead it’s their contention, their efforts to shut down, cancel and manipulate the movements of their opponent that gives it form.

I’m aware that was a beast of a sentence, and in this too i am un-apologetic.

To be fair, i’m not even sure i could write flowery poetry if I tried, because frankly, I think the scapula is a beautiful bone, and even to discuss how it works is unbearably poetic to me. So really what I’m describing as a full blown love poem might end up looking more like an anatomical, bio-mechanical scientific breakdown.

Ultimately I think the whole big picture point of training BJJ is to build your jiu jitsu for like…6-10 years from now and beyond. (For any craft. I don’t have to keep saying that right? There’s really no conceptual difference in the least between learning brazilian jiu jitsu and learning ballet.) You have to think of going to the gym as an investment in something that you won’t even understand until you’ve spent thousands of hours investing in it.

If the idea of getting a new belt is what drives your training every day, you’re in for a rough ride once you hit black belt cuz you’re gonna sit at that sucker for 30 years. Likewise if you’re living for competing because you need/want that win so badly, (maybe so your dad sitting crossed arms in the stands can give you one of those precious unblinking nods, finally signifying his approval. His lip quivering under his giant walrus moustache.Your father is a walrus.) eventually that’s going to dry up too and you’re going to have to find another reason to drag your ass to the gym every day. Even training just to keep up with or surpass your training partners is a tough sell, because most people come and go. I’ve lost so many regular training partners over the years I struggle to remember them all. The goal should be to build your perfect jiu jitsu; the most flow, the least effort, and the maximum use of your opponents attributes for your gain.

And what you need to build that is time. Good time, bad time, soul-crushing disappointment in your incredible shittiness at your art, whatever, you need it all. I would contend that unless you have a very intimate relationship with bone-crushing failure, you’ll probably never produce anything really interesting and new.

But lots of people quit BJJ. Like….most people quit BJJ. It’s stupidly hard, emotionally demanding, physically exhausting, technically complex, whatever. It’s really hard. But holy shit, stick with this for 10 years and it is damn cool. What your body becomes capable of, after thousands and thousands of hours on the mat is hard to describe. It’s not so much that you have hundreds of tools now, when you started with only a hammer. It’s more like you finally understand the hammer. And after spending years not only learning how to use the shitty one size fits all hammer you were given when you walked in the door, (to stretch the analogy even further), you’ve also learned what kinds of materials you prefer, what weight, what shape and so on and you’ve crafted a hammer that’s perfect for you. You know what it feels like to one hit a nail and bury it with confidence, because you’ve done it more times than you can count, and you know how best to create the necessary angles and situations in which to use it to its maximum potential. (My 22 oz stanley anti-vibe hammer was like Mjolnir at my side, and each swing cracked with thunder, rescuing the swamps of Sherwood Park from houselessness)

And so because you now understand a large number of the tools you’ve used over the years, you know which ones suit you best, and don’t have as much need of more. You’ve built depth rather than breadth. Knowing all of the techniques is meaningless if you do not understand what you know.

One of the many things I love about jiu jitsu is how once the fundamentals are understood and are beginning to be internalized, a practitioners “style” starts to present itself. And everyone is different. And should be. I can’t think of two people who share an identical body type, inch for inch, pound for pound, attribute for attribute, learning ability for learning ability (yes, the miyao bros, smartass) so why in the world would we ever expect stylistic uniformity even within just one school? What is considered the fundamentals of BJJ should be the same across the board because the fundamentals of BJJ are just the fundamentals of movement. Generation of force, use of leverage, and harnessing momentum are not things that Helio Gracie invented. It’s just physics. And they’re universal across all sports and physical pursuits as they apply to the human body. (That’s why i think a curriculum that consists of a set number of moves is a less efficient and ultimately frustrating approach. Whereas a curriculum that has strong conceptual boundaries but an ever rotating vocabulary of techniques, each given time to seed, germinate and sprout, staying current and progressive with heavy emphasis on smoothness of execution, ease in functional use, and deep proprioceptive awareness serves the purpose of building a high jiu jitsu IQ within your school much better)

Style ends up being the most important facet of your practice, once you really own the building blocks of fundamentals. It’s through your style that you’ll find your best jiu jitsu. It isn’t just about preference, but instead about recognizing your strengths and weaknesses. Once you have a keen understanding of your strengths and weaknesses, your style will be defined by how intelligently you utilize the former, and how keenly (and humbly) you use the latter as a guide for where you will most quickly improve.

You have to think about style as the flower of a plant though, like a natural consequence of a long difficult evolutionary process. If you chase style like cut tabletop flowers, always buying new ones to decorate until they inevitably wilt and are thrown away, you’ll always be frustrated that your game never feels “right”. Better to prepare the soil, plant a seed, water it, wait for it to die die die die i hate jiu jitsu so much die wah wah wah everyone keeps passing my guard die some more, then start to sprout little shoots above the surface until eventually it reaches maturity and becomes something nice to look at, something beautiful to behold. The flower is only the strongest visual display of what made the plant capable of flowering in the first place, as your jiu jitsu style should be a representation of your deep internalization of fundamental movement concepts, and how you’ve navigated your strengths and weaknesses.

Nobody admires the stem, and no one sees the roots, but without them there wouldn’t be a flower in the first place. Without deep internalization of the efficiency of movement, body control, proprioception, sensitivity and technical understanding of leverage, force generation and momentum, a “style” is just a cheap veneer, with no depth. A nice suit on a buffalo. Or say, a walrus hypothetically. Everyone knows it’s still a walrus, or your father, in this case. (Who happens to be a walrus, if you’ll remember)

But put in the time, commit for the long haul and embrace potentially boring or frustrating plateaus, lots of humblings, and eventually Jiu Jitsu becomes pretty incredible. And let’s be honest, it’s already pretty incredible by about your second class, so imagine what 5, 10, 15, 40 years of work would give you.

Play the long game, it’s worth it.

One thought on “Writing About Music is Like Dancing About Architecture, OR, Style Is Not a Tabletop Flower”